I’ve been talking a lot lately about game design. It’s been fun. One of those talks is up. I did a stint on the RPG Brewery and talked mostly about Pathfinder 2nd Edition Playtest, here. I also went on the Obligatory RPG Show out of Australia and talked some more about P2P, my experience, and other aspects of game design, including a little bit on Delve. I’ll let you know when that one sees release to a broader market. Last, but certainly not least, I had a talk with Uncle Matt Finch over at Old School Gamer Radio, where we get into an enjoyable conversation about GM fiat and adventure design. Matt’s an Old School Renaissance guy, and I love me some old school. But I’m also one of these newfangled rules guys, so we talk a bit about how those two philosophies could converge. I look forward to my next talk with him where I think we are going to battle it out over baked ziti and PC agency. That first talk will likely go up this Thursday. When these casts get posted, I will put the links on the Upcoming Events for now, and will create a podcast page shortly. I’ll also share them on social media.

Oh, and I did a preview blog for the rogue over at paizo.com. You can find that here.

But enough about P2P and podcasts, let’s talk Delve. Especially the epiphany I had about reactions in the game after my playtest at Gary Con X.

So I’ve gone over this before, but Delve uses an initiative process inspired (some might say swiped) by Shadow of the Demon Lord. My buddy Rob had a good idea there. The basics are bad guys go first unless the PCs pay the price in actions.

At the start of each of the round, each actor in Delve gains some number of actions. That number is usually three, but sometimes you will gain extra actions. Typically these extra actions have some restriction. You might get an extra action that can only be used to use certain types of reactions. Powerful magic that manipulates time and movement can grant you extra actions beyond the pale. But whatever actions you get at the start of the round, that’s all you can use. Reactions—that is those abilities you can use on anyone’s turn, as long as they are triggered.

How do the characters get a drop on the monsters? Characters gain a heroic pool, and a few heroic talents at first level: Heroic Save, Heroic Surge, and Heroic Sacrifice. Heroic Surge is a reaction that you can spend at the start of the round (after you gain your actions, of course), to go before the adversaries. The cost, of course, since it is a reaction, is the cost of spending that action. Go fast, but go only twice. Go slow, go three times.

The trick with reactions in the system is that your instincts are to go conservative, don’t make them a sure thing. Those were my instincts at the start, but through playtests I found the error in it.

Heroic Surge is the perfect benchmark for reactions. And there are a few reasons why. First, most heroic talents draw upon a pool of heroics. Heroics is a mix of experience and force of personality. Many heroic talents require you to spend your daily supply of Heroics, but Heroic Surge is nearly at-will. As long as you have at least one Heroics, you can use Heroic Surge. My original Heroic Save had a cost. 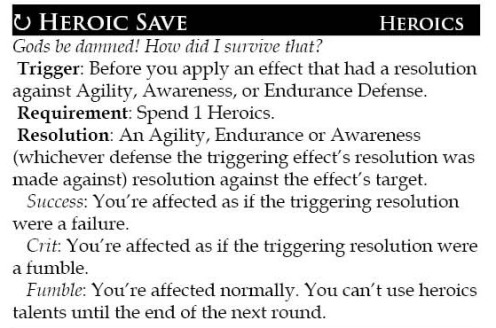 Heroic Save is the get out of jail potential. The saving throw, as it were. And because of that, I thought that having a roll was appropriate. But now I’m not so sure. The cost and the timing have made it uncertain in utility. You usually couldn’t use it at all if you surged, and fretted to use it when you could, due to the cost of two types of finite resources—Heroics and actions.

So, going back the drawing board I came up with this one.

It’s a significant restructuring that streamlines the talent a bit. It’s a shift in power-level, but a needed one. It grants a lot more for its dual costs. Of course, it has ramifications for higher level adversary design but in an exciting way. They can start to get genuinely monstrous, knowing that the characters who are smart in their save resource management can shrug off a limited number of the most gruesome effects. The addition of a sacrifice effect ups the ante even more. Lose the use of that talent for a day to truly save your ass.

Of course, there are other reactions in the game, and each one of them is going to have to go under extra scrutiny, using Heroic Surge as the benchmark. But, hey, this is the job.

It occurs to me that I haven’t said anything about the Heroic Sacrifice talent, but let’s save that for next week when I talk about death. Until then, roll 20s.