Earlier this week, I talked about monster creation and launched Monster Monday. What’s Monster Monday? Over on the Delve Patreon, I’ll be previewing pages from the Delve Bestiary on Mondays. For example, this coming Monday, it will feature the warlord page—which is a low-level villain that is tailor-made to go with the bandits that I shared there this past Monday. If you take a look at Monday’s blog, you can get a preview of what these pages look like, because I shared an image of the ghouls’ page.

What makes the warlord different? Well, he’s a villain, which means he has an attribute called Villainy. Villainy is like Heroics in reverse. It’s basically a tool to make a baddie really stand out, become more of a challenge, and do some amazingly fun stuff. The basic rules for Villainy are the same as for Heroics. It’s a pool of points that is usually based on the character’s Charm (though it might be based on Knowledge or Awareness for some villains) that the Delve Master spends on Villainous talents. All villains have the following pair of talents.

So the observant reader might notice that these are similar to the base Heroics talents I’ve outlined in earlier posts. But there are some challenges and differences.

First, the challenge. Villainous Surge is tricky to run because the Delve Master, unlike the players, can use it in secret. While at the beginning of the round, all players must decide whether or not they are going to surge that rounds (I give them tokens that they place in front of them to indicate that they are surging), the Delve Master decides this in secret before the players decide. But, this may lead players to think that the Delve Master might cheat, and actually make the decision after seeing who among the players surge. To combat this worry, I bring a small black go game piece to the game. I explain that at the start of every round, I will either place the go piece in my hand or not. Then, I hold the hand out while players decide the surge or not. After all the players decide whether or not they want to surge that round, I open my hand. If the go game piece is in my hand, the adversary has decided to use Villainous Surge.

And now for the difference. Villainous Foil lacks an action sigil. The version of Heroic Save I shared earlier has a reaction sigil (the pair of arrows in the circle). Well, that’s a change that will become reflected in the published version of Heroic Save as well. During the last few rounds of playtesting, I found that while folks were really excited to have Heroic Save, they were a bit stymied by having to spend both Heroics and use a reaction. It just cost too much, and sometimes by the time they wanted to use the talent, they just didn’t have an actions left.

From the start of Delve’s development, I worked hard to avoid having free actions in the game. I’d worked on several games that used free actions, and found their proliferation to warp gameplay as the years went on. As a system was littered with free actions, some players worked hard (or created rules interpretations) that allowed them to pile on many free actions in sometimes comical ways. But when I started to notice that Heroic Save was not only not doing its job, but also created some frustration in gameplay, I had to rethink my ban on free actions. I decided it was more important to lift the ban for these abilities than it was to have zero free actions in the game. So, there you have it. It doesn’t matter whether or not you have an action to use, as long as you can spend the Heroics (or the Villainy), you can gain the effect. Don’t expect there to be many other “free actions” in the system, though when you do find them, they will likely be in either Heroic or Villainous talents.

But these two talents are just the tip of the iceberg. Like characters and Heroics, villains can have several different Villainous talents. For instance, the warlord has one called Villainous Command, which basically allows him to command one of his allies to make a quick attack. More powerful villains have even crazier ones. For instance, Tophet Gaius, the Fungus Queen in part 2 of the Crumbling Spire mega-dungeon (one of the adventures I’ve been running when I go to Conventions and will be running in some of the upcoming online games), has this doozy.

Here is another one I’ve been toying with…sort of the villain’s version of Heroic Sacrifice. 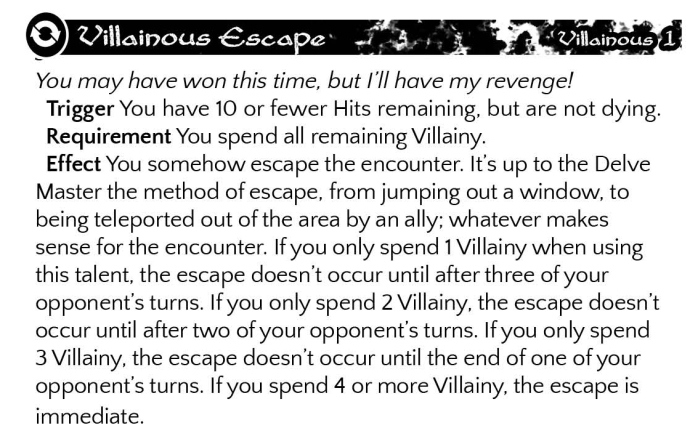 I like this one because it is just the right kind of cool and goofy. It’s a fun way to create a reoccurring villain. I’m tempted to have it as strange floating villainous talent in the Delve Master’s toolbox to use whenever they want, in the same way that all heroes gain Heroic Sacrifice. Still, I think it works best when combined with good encounter design, so you can create exciting and evocative ways in the encounter allowing the villain to use this talent. I’ll also point out that it’s not foolproof. Many caveats within the talent give the heroes a chance to clutch at victory before the escape occurs. I think that’s important. Players often feel disappointed when they have no chance of success, and that’s why I build in such caveats. After all, the Delve Master can always make another villain takes the place of a vanquished one.

As I announced last week, I’m starting a handful of online Delve sessions for those of you who want to try out the game. In the Upcoming Event page of this website, I have the dates and times along with the status of each game in red. Right now, next week’s game is nearly full, and the one on May 5th is full, but I have a fair number of spots available for the April 21st and 28th games. So if you’ve been holding back, and those dates work for you, email me at srm@delve-rpg.com, and let’s play some Delve!

Well, that’s it for me this week. Stay safe, stay healthy, and play games when you can. Over and out.