It’s Friday, everyone. I’ll be spending the majority of my weekend at OrcaCon, hanging out with friends, talking with gamers, and even playing a game or two, but before I headed out, I wanted to kick off the weekend by unveiling more about spells in Delve.

Last week, I talked about the fundamentals of magic. Magic, whether it’s your own spellcasting power, or by the use of some item, like a scroll, mystery, or relic (to name a few) is manifested and controlled by way of activities using casting actions. These activities require at least one and usually more of these casting actions to gain the magic effect.

Today I’ve outlined one spell examples, but I should explain a few things.

Sometimes spells require resolutions. Say if you are a wizard, and your spell targets an enemy, you’ll need to make Knowledge resolution against the appropriate defense. If you have to roll a resolution, and you fumble, the spell’s disrupted: the effect does not occur, you lose any remaining casting actions, and you can’t cast it again until you prepare. If you take damage from a reaction while you are casting a spell, it’s disrupted. Long-time players of such games know the drill. Some of the specifics are a tad different, but these are all things you are used to.

So, you cast the spell; it’s not disrupted. What then? Well, you can cast it again. Whenever you want, assuming you have the actions and it’s your turn, of course. You don’t usually lose spells when you cast them in Delve. You only do when they are disrupted or sacrificed. 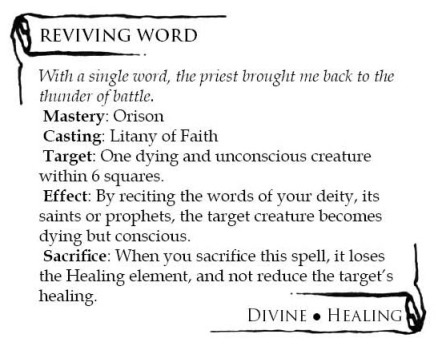 How do you sacrifice a spell? First, before you start casting, you declare that you’re going to sacrifice the spell. Typically when you sacrifice a spell, you cast it in the same way. On rare occasions, a sacrificed spell might require more actions. But the spell’s effect becomes more powerful. It might deal more damage. It might be harder to resist. Or, in the case of the first example, reviving word, it doesn’t reduce the target’s healing. In return, you can’t cast that spell until you prepare again. Typically, you can only prepare once per day.

It’s also fun and solves some fundamental problems these games have been grappling with for a long time. First, it allows spellcasters to be less consumable dependent on long adventuring days. That’s not to say that there will not be consumable items in Delve—oh there will—but casters can rely on their own power rather than piss gold away to keep the adventuring day going. This change also tackles the problems of the 15-minute adventuring day and makes spellcasters fell like owners of magic rather than renters of such power. Lastly, it encourages a greater degree of spell diversity. Do you like lobbing balls of fire? You don’t have to prepare six fireballs. One will do. You can prepare other spells with more utility in combat non-combat situations.

Lastly, each spell has a built-in exploit. While sacrificing is a cost, all of the sacrifice effects have the possibility of turning the tables on challenges you face. Correctly played, these sacrifices can make you feel like a true paragon of magic might, and gives you direct control over the churn of magical resources.

Well, that’s it for now. I have to go frolic amid the faithful and chuck dice with friends. Next week I’ll pick up on this topic and present some arcane mysteries.