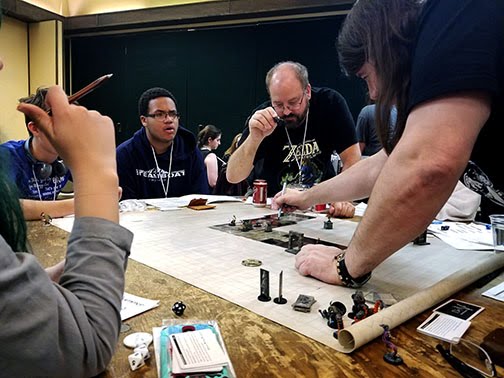 I don’t know how your world is going, but here they’ve been swamped. Moving to the new home and office is finally complete (though the unpacking and reorganizing continue). The day after the final scrub down and handing over the keys to my Shack in the Woods–my abode for the past five years–did I rest? No, I got in a car and made the 10-hour drive to Great Falls, Montana, for Great Falls Gaming Rendevous.

It was absolutely worth it, though. Sure the drive was long, and the last pass was icy and treacherous–two of my least favorite things in real life–but the folks in Montana were fantastic. I not only ran a great game of Delve with a bunch of players a little younger than my typical demographic, but I also ran a great group of folks through Sanctuary of Sin.

What’s Sanctuary of Sin? It’s the first in a series of adventures and supplements I’m writing for the Pathfinder Second Edition system called the Salvoy Tapestry. These adventures are old school in scope–mature but not juvenile or puerile–filled with high adventure and low-down dirty villains, new rules, new monsters, and gritty fun, that can be run in a session or two. I’m also working with Wizards of the Couch recording a playthrough video or two. So, whether you are interested in maybe running the adventure or just to see how the new edition of Pathfinder plays, stay tuned.

Both games were wonderful. The folks playing Sanctuary of Sin loved the traps and mysteries, the devious foes, and are looking forward to seeing how the adventure turns out in its final form. And that’s great, and many of the players were there because they wanted to learn P2 or play with one of the folks that designed the game they loved, but it wasn’t the best part of the show.

The very best part was the Delve game. I sidled up to the game table, and what I saw before me was a little different than the other game’s I’d run before. I’m used to a sea of folks who are fairly much like me. Dudes, aging, many of which became entranced with roleplaying games somewhere in the 80s or during the great resurgence of 3rd Edition. This table skewed much younger. One fella was of the typical demographic, he was probably about my age, but of the rest, the oldest hovered around 16 or 17. Three were young ladies, the youngest about 11. I’m going to admit that I was a bit worried.

What the hell would a bunch of young people think about this game? It was so full of the things that I liked about RPGs. It had old-school tropes–a black-and-white aesthetic, bearded dwarven ladies, grognard-era humor, and old-fashion dungeon crawling with minis on a grid. Were they just look at me slack-jawed and wonder what the hell they go into?

I’m going to admit, it didn’t start out well. I handed out the character packets, miniatures, item and achievement cards, and then I went into my standard spiel about the rules. As I did, I could see eyes go glassy, bored with my talk about how the game was run and what all the various parts meant. Folks fiddled with their miniatures and were struggling not to pick up their smartphones and beg some random friend or app to spare them from all of this boring shit.

I was prepared for the first bad game of Delve I had ever run. But boy was I wrong.

From the start, when I started describing the city of Nesserin, the strange ghoul-infested Crypts Ward of the city, and the mission to track down ancient artifacts in a long-abandoned mausoleum of a nearly-forgotten family exiled long ago for practicing forbidden magicks, the entire group lit up. Soon, they were scouring their character sheets for information about their capabilities and became focused on their achievement cards, looking for a way to reach their goals. The exploration and rounds of encounters flowed freely as the group worked together to foil foes and traps. They spoke encouragement and talked shit to each other in character, thoroughly inhabiting their roles. No matter the player’s age or their earlier encounters with RPGs (three of them had played their first RPG just earlier in the day, and most of their characters had died), they played like pros. It was exhilarating.

In the end, though a number of them crept close to death’s door, they achieved victory. And each and every one of them deserved it. I’ve had few tables that fought harder than this one. And with their foes defeated before them, their aims achieved, they slapped high fives and were giddy at their success. After the game, a few players found tactics on their character sheets that they wished they had used, with the story and mechanics still swirling around their heads. One young lady (cosplaying with green hair, make-up, and a what I imagine might be a Joker’s smile, but could be some anime character I’m not familiar with) told me it was one of the best games she ever played. Who I supposed was the father of the other two young ladies shook my hand and thanked me for running such a fun event. Everyone wanted to know when the game was coming out. I told them about the Patreon, told them what all still needed to be done, and they were still all excited.

Every time I run Delve, I’m so happy with the reactions. But this time especially so. It was an eye-opening experience that this game can reach a younger crowd than I ever imagined. That gaming, this crazy old form of gaming that doesn’t involve flashy animation, augmented reality, or catching all the things on some virtual landscape, can still carve out an audience among smart, imaginative kids. Like in the days of my youth, they may not be the norm, but they are they’re present and hungry for adventure.