Well, spring is upon us, and it’s a weird one. With conventions being canceled all over the world, and many folks are stuck at home, this is definitely not the way I supposed starting this season in 2020, and neither did you. While I was looking forward to running games at KoboldCon, Norwescon, and even a Delve game for some friends at Enfilade!—a historical minis convention in Olympia that I was looking forward to attending this year–it was not meant to be. You see, Enfilade! is my favorite convention—old school, pushing metal around a terrain table, and so much fun. I looked forward to every Memorial Day weekend to hang out with friends and play minis games. But when Paizo Con moved to Memorial Day, my Enfilade! weekend evaporated or just turned into an evening when I could escape work duties and go hang out with my buddies.

This would have been the first time in five years that I was able to go to that show. It’s my fun show. But, while the con has not officially been canceled, I’m guessing it will be. Paizo just announced the cancelation of Paizo Con this year, after all. And even if it is not, I’ll likely stay put. I don’t believe in miracles.

But, hey, disruption of normal life aside, we are going to make the best of it. First and foremost, stay home if you can, and let’s do our part in flattening the curve of the spread of infection. Do your work from home, paint some minis, play some games, and take care of yourself. Good for us, we live in the future. Reach out to loved ones, make sure your friends are doing okay with social media and Facetime, Skype, or whatever. Look into virtual tabletops for your games; weather this storm the best you can.

This is my friend Charlie kicking ass during a Delve game at OrcaCon. Oh, those heady days when we could play in person.

For those of you who can’t stay home, be safe, stay healthy, and thank you for the essential work you are doing.

Oh, and for fuck sake, everyone, wash your goddamn hands!

Okay. Enough of that. Let’s talk a bit about Delve.

The year started out with a bang. Based on last fall and winter’s games, I went through the playtest characters, the first three chapters in the book and made changes based on those playtests. I made adjustments to the iconics and did some clean-up of the character sheets, and then sent a massive batch for printing. My goal was to print enough for at least the first six months of the year since my convention schedule was pretty full.

Next, I cleaned up the first chapter of my Crumbling Spire adventure. Last fall, I ordered a drawing tablet (based on the recommendations by the fantastic Alyssa Faden) and put together some publishable maps. I also put in a printing order for some boons to give out to those who played Delve at the conventions.

By January, I was ready for OrcaCon. And that show was fantastic. I ran three great games with a bunch of excellent players. Folks really liked what they saw, and were quick to give constructive feedback. I was feeling terrific about the direction it was all going in. A few weeks later, I was in Fort Wayne Indiana, ran even more games. I got great feedback, and then I traveled down to Tennessee, spent some time with Rob Schwalb and the gang from Rob’s Basement. We played a game that you can find here. It’s all audio and no video, but it gives you an irreverent peek at the game.

Then the world went to shit, and I was buried in freelance. By the time I came up for air, the world was even worse, and my household was already on stay-at-home mode. You see, I’m one of those fuckers who tends to stay informed and everything I was reading told me that the immune-compromised folks in my family and my neighborhood were at high risk and that we were all facing risk. We live 5-miles from the first epicenter in the US—that care facility in Kirkland, WA. In short, I’ve rarely left my home for more than a month now. I imagine it will be a month or two more, if not more.

Similar to what I only imagine that most of you are going through right now, it takes a little time for the new normal to seem…well…normal. Fuck that, it’s not normal, how about endurable.

Now that I am somewhat there, I started to focus a bit more on Delve and think about this project, given the new realities. I’ve come to a couple decisions. First, for those of you who are Patreon Delvers and Lurkers, I’ve postponed payments for the next month, and will likely do so until we get past this storm. I know things are very hard for a great many people, and I’ve collected enough of your generosity to pay for a great deal of artwork. I’m about to send Rick Hershey a rather large art order, with the art paid for in advance, because many content creators are feeling this crisis hard. If you like Rick’s and Fat Goblin’s work, he is currently having a sale on Drive Thru RPG. Not only for their fantastic stock art, but there are also games and content for Pathfinder, Starfinder, and D&D. Check it all out, and if you can purchase something. Rick’s a fantastic person with top-notch work. And those sale prices are crazy! 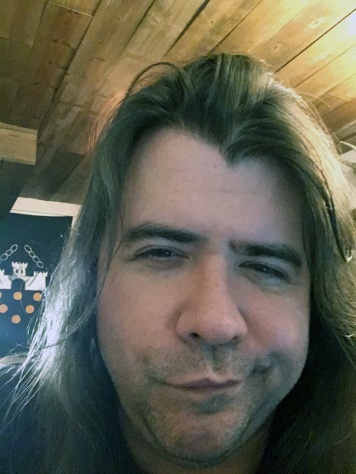 Me in the den of Delve wondering when this shit will get back to some semblance of normal.

In general, RPG producers are going to be walloped. Diamond Distribution has shut down due to the virus, and publishers of gamebooks are going to feel it hard. Consider taking a look at PDF products from Paizo, Green Ronin, Schwalb Entertainment and other publishers. Do what you can to support the art you love. If you can’t, well, don’t. Your wellbeing comes first.

Next, since I’m missing out on some face-to-face games for playtesting, I’m going to be running a series of weekly online playtests starting in April and probably running through May. Priority for those spots go to patrons, but if I have openings, I’ll let you know. If I can’t come to you in person, I’ll do so virtually.

That and I’m back working on Delve. While I have been lucky, and have a continual flow of freelance to keep me afloat, it’s much more manageable now. Expect to see more here and on the Patreon page in the coming weeks and months.

Well, that’s what I got. Stay safe, sane, and healthy, my friends. Play games when you can, and tell those close to you that you love them. When this is all over, we can celebrate.