I was already primed on this type of fantasy. My early joys were The Hobbit, Narnia, Dracula, as well as Creepy Magazine and Star Wars. I was ready for a game influenced by these, Lovecraft, Leiber, Burroughs, Moorcock, and Howard and when I was younger read them through the lens of Gygax and the others who produced the first game I truly loved…that through all these years I still love. 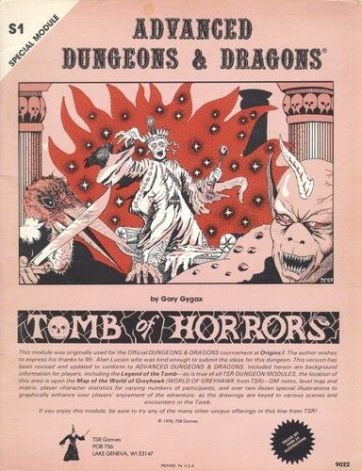 This was the first roleplaying product I’ve ever owned. It may have scarred me.

I’m an older dude. And I’m going to use my old man voice, with a tinge of old New York, to tell all you younger fuckers that you don’t know how good you have it. We live in the wake of Dungeons & Dragons. Nearly every game on the market uses some semblance of the mechanic, the scope, or even the setting of D&D. No D&D, no Warhammer, and by extension no World of Warcraft. No D&D, no Knights of the Old Republic, and by extension, no Dragon Age. No D&D no Doom, Gauntlet, Diablo…you get the drift. Some may argue that the idea of another tabletop roleplaying game when there have been so many over the years is a foolish one. Isn’t that well dry? Isn’t it more profitable to provide a slicker, more whiz-bang approach? Bah! I like tabletop games. I like the communitas of it; the coming together like real human beings to share in make-believe. I like the process of creating a sharing imagination through good old fashion rules and game procedures. I told you. I’m old.

I’ll freely admit that early D&D had more promise than gumption. Even the old school gamers find ways to fine-tune the older engines. Their designers disregard or update the clunkiest of the traditional rules, just like they did when acne was a problem. The various games released between 1974 and the OGL attempted to

improve on the form, but often this was achieved by either specializing or simulationist cravings of slow play and the wow factor of tables. The best (or, arguably the most commercially successful) roleplaying games seek the delicate balance between robust rules paired with elegant design. While I joined Wizards of the Coast after the design of 3rd Edition D&D, the development of that game, the 3.5 revision, and 4th Edition and Star Wars Saga Edition always attempted to achieve that. So is Pathfinder, 5th Edition, and the upcoming Starfinder game.

Currently, the pinnacle of that elusive design mix is Shadow of the Demon Lord, by Robert Schwalb, but that doesn’t surprise me. Rob is a masterful designer fueled of metal and hate. He’s also a big burning hunk of vegetarian love. He’s an inspiring human being, and his incredible work on that game, as well as our long conversations about games, the industry, life, politics, and philosophy, has truly inspired me over the years. The inspiration for Delve came out of those long talks. Bits and pieces have appeared in plain sight. I’ve laid some groundwork, teased here and there. I used other projects to concrete some of my thoughts on subjects. The action economy in Pathfinder Unchained is a direct antecedent to the action economy in Delve, though by no means the last word. For years, I’ve worked to make better mouse traps in systems I had only partial control over. Maybe I’m getting greedy. Or maybe I’ve just found my voice.

I’m going to warn you now that I’m relatively fearless in my design. I’m sure as hell not afraid of tearing out an engine and put it back together. While the game I’m creating is going to seem familiar in a lot of ways, it is neither sentimental and shirks momentum when such things are not doing work, or working in the wrong direction. Some of you are going to be intrigued what you see in the coming span. Others are going to wonder why I did such and such, or why I changed some other bit. Well, that’s what this site is for. My posts are not only going to preview the story and the assumptions of the Delve multiverse, but they’ll also serve to put those bits in context and explain their purpose.

That and to tell you other shit. Stay tuned.