Nearly every turn-based game has an action economy. The most basic one is so ingrained in our ideas of games, it almost goes unspoken: you can do something then I can do something. It’s often fair (or slightly favors the person going first) and so intrinsic to the way in which we’ve perceived turn-based games for thousands of years, it almost doesn’t have to be stated. And it wasn’t in the earliest version of D&D. To say that the rules for turns and actions were a mess in OD&D would be an understatement. When moving in the underground, you have a turn, where you can take two movements (or four if you’re in flight but no mapping is allowed), assuming you are not in melee. At that point, there are 10 rounds per turn, and you might get a free movement segment (which by using segment can be read as either 60 feet or 120 feet, that part is very unclear), cast a spell, or engage in combat if you can achieve surprise. 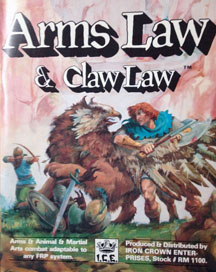 While most have fond memories of Arms Law (1980) for the abundance of critical charts, it was the first part that intrigued me–a defined and clear sequence of play.

Except for the inference that a creature that gains surprise can act twice before their enemies go, there is little to be said about who goes first and the order of the turn. Eldritch Wizardry features some fairly complicated rules for segment order based on Dexterity, and the Eric Holmes version of the Basic Set put together a turn order, but neither of them spoke to any idea of initiative. I’m pretty sure that sans considerations about surprise, initiative was determined by the DM.

The next phase of the game did feature Initiative. Both the rules in the 1st Edition Dungeon Master’s Guide and the Moldvay Basic Set had each side roll a d6 and granted the initiative to the higher roller. In the case of ties, the initiative was simultaneous. It’s implied (but never actually stated) that damage is applied at the end of a simultaneous initiative, which a combatant with initiative if they kill a creature without it, does not need to worry about any follow-up attacks. Throughout this all, there is an implication that each round one can take a move and engage in their attack routine. Often the routine is split between unspecified initiative phases. Moving hastily out of combat grants a free attack from those you are attempting to flee from, giving us the progenitor of the attack of opportunity.

I first encountered an area of threatened squares with the Death Zone mechanic of Blood Bowl back in 1986. The next year saw the Death Zone supplement to that game and gave an opposing player a free attack when you attempt to move out of a square of the opponent’s Death Zone. The mechanic is nearly identical to attacks of opportunity.

With 2nd Edition, changes came to initiative. A d10 was rolled instead of a d6. Low roll grants initiative and there are some modifiers to initiative, most of which never saw the light of play, at least in my experience. While many of those modifiers talked to the states or abilities of individual creatures, the modifiers were gained only in the cases where everyone benefited. Like 1st Edition, multiple attacks were split up among unnamed phases in the round. Fleeing also provoked free attacks. With the advent of Combat & Tactics at the end of the 2nd Edition cycle, the initiative phases were named, and attacks of opportunity morphed into something modern gamers might recognize.

Oh, and unlike 3rd Edition and later systems, you rolled Initiative each round. And in all these systems (and echoed in 5th edition) it should be noted movement is not an action. It is something outside of an action.

This was all changed with 3rd Edition. That game brought in a cyclical initiative, featuring a d20 rolled at the start of combat and modified by Dexterity. It cleaned up the action economy a great deal and created a rather satisfying system. As the edition grew, and morphed into what would become Pathfinder and 4th Edition, action types were expanded to cover swift (or minor) and immediate actions. Those actions first appeared in the 3.5 Miniatures Handbook (if you don’t count feather fall and some strange free actions that were out there), they became a mainstay in later editions. With the advent of 5th Edition, the cyclical d20 initiative roll stayed, moving became a non-action action like object, swift actions virtually disappeared, and bonus actions and reactions found their way into the game, but usually as exceptions to the main rule of one action (plus movement) each round.

While at first, it may seem like 5th Edition clean up the action economy, I found it kept some of the same complexity but hid it under carpets strategically placed around the rules. It created a kind of egg hunt for exploits, both real and perceived, and then closes them off with hard caps. It’s an interesting solution, but I think there is a better way.

More on that this Friday.

2 thoughts on “Actions (Historical Aside)”